“1655 Stopover in Coimbra: A young Jesuit between West and East”, ed. by Noël Golvers and Carlota Simões 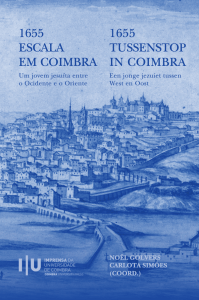 In the letter published here, a young Jesuit priest educated in the colleges of the Society of Jesus in Brabant gives a detailed account of life in the College of Jesus in Coimbra, where he stayed for a few months in 1655, on an unscheduled stopover during his journey between Europe and the Far East. Inácio Hartoghvelt’s description offers us a guided tour of the spaces of the Society of Jesus in Coimbra (Colégio de Jesus, Colégio das Artes, Quinta de Vila Franca), allowing us to look at the buildings from the inside, giving us the opportunity to glimpse the nearly two hundred occupants in their daily activities. Inácio constantly compares the Coimbra college with those in Brabant, emphasizing the Spartan austerity in Coimbra. Some aspects provoke the author’s astonishment, revealing also his admiration and respect when he realizes that this stopover in Coimbra was the best preparation for the difficulties that awaited him in his mission to China.

Noël Golvers. D. in Classical Philology from the Catholic University of Louvain, was Professor at the Katholieke Hogeschool Leuven (KHL/presently UCLL) and is Senior Research Fellow at the Catholic University of Louvain. He is a full member of the International Academy for the History of Science (Paris) and a corresponding member of the Centre of Overseas History (Lisbon) and of the Seminarium Philologiae Humanisticae (Louvain)

Carlota Simões. D. in Mathematics from the University of Twente, the Netherlands, is an Assistant Professor at the Department of Mathematics of the Faculty of Sciences and Technology of the University of Coimbra (UC) and a member of the Physics Centre of the UC. She was part of the direction of the Science Museum of the UC between 2007 and 2019. She is a Corresponding Member of the Arts, Letters and Sciences Class of the Navy Academy.