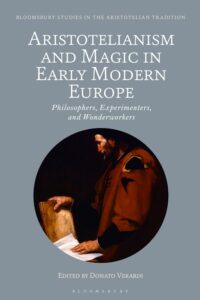 Magic is central to Aristotle’s philosophy in this wide-ranging collection of essays that re-frame his natural philosophy. From late Mediaeval and Renaissance discussions on the attribution of magical works to Aristotle, to the philosophical and social justifications of magic, contributors chart magic as the mother science of natural philosophy.

Tracing the nascent presence of Aristotelianism in early modern Europe, Aristotelianism and Magic in Early Modern Europe shows the adaptability and openness of Aristotelianism to magic. This collection weaves the paranormal and the scientific together, pairing the supposed superstition of the pre-modern era with modern scientific sensibilities. Essays focus on the work of early modern scholars and magicians such as Giambattista Della Porta, Wolferd Senguerd, and Johann Nikolaus Martius. The attribution of the Secretum Secretorum to Aristotle, the role of illusionism, and the relationship between the technical and magical all provide further insight into the complex picture of magic, Aristotle and early modern Europe. This collection proposes an innovative way of approaching the development of pre-modern science whilst also acknowledging the crucial role that concepts like magic and illusion played in Aristotle’s time.