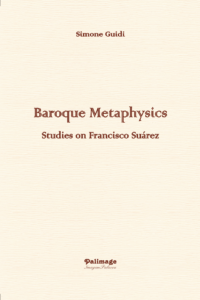 This book collects six unpublished and published academic studies on the thought of Francisco Suárez, which is addressed through accurate textual analyses and meticulous contextualization of his doctrines in the Scholastic debate. The present essays aim to portray two complementary aspects coexisting in the work of the Uncommon Doctor: his innovative approach and his adherence to the tradition. To this scope, they focus on some pivotal, but often neglected, topics in Suárez’s metaphysics and psychology – such as his theories of knowledge and truth, angelology, continuous quantity – thereby developing an original inquiry into a crucial moment in the development of Western philosophy.

Simone Guidi (1984) is currently a Researcher at the Italian National Research Council – Institute for the European Intellectual Lexicon and History of Ideas (CNR-ILIESI). His work focuses especially on the history of Early Modern Philosophy, with special attention to the Jesuit Scholastic context and its role in the genesis of the thought of Descartes. He has been an Assistant Professor of Philosophy at the University of Coimbra’s Faculty of Arts and Humanities (FLUC), as well as an FCT Post-Doc Fellow at the University of Coimbra’s Instituto de Estudos Filosóficos (IEF). He is the editorial coordinator of the project Conimbricenses.org (directed by Mário Santiago de Carvalho), and the author of many academic volumes and articles.