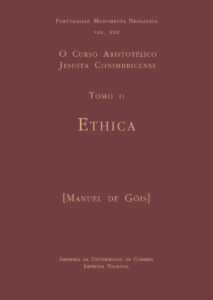 Among all the Commentaries on the ‘Nichomachean Ethics’ by Aristotle, the Jesuit Coimbra Commentary (16th Century), written by Manuel de Góis, as a part of the widely known Jesuit Coimbra Commentaries (1592-1606), has its particularities. It is not a full-scale treatment of the Aristotelian title but its nine disputations form a brief compendium in which it is possible to see the relevance of Thomas Aquinas’s Summa theologiae. As happened with the other Coimbra titles, the Ethica soon spread throughout European Universities and Colleges, and arrived in South American territories and China. The present volume, the second tome of the series that the IUC is presently publishing, introduces the Coimbra text and provides a modern edition of the original Latin with a Portuguese translation.

This is the first bilingual edition (original Latin text and Portuguese translation) of the original commentary by Góis, published by the Coimbra University Press as the first volume of an overall project of translation of the entire Cursus Conimbricenses. More volumes will appear thus in the next months. Stay tuned!