“Centres and Peripheries in the History of Philosophical Thought. Essays in Honour of Loris Sturlese”, Brepols 2021 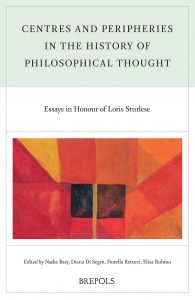 The notions of ‘centre’ and ‘peripheries’ are the two paradigms guiding through a broad analysis of figures, places and topics within the history of philosophy.

This volume is an homage to the great intellectual contribution made by Loris Sturlese to the field of history of medieval philosophy. Its point of departure lies in a methodological line, which Sturlese has maintained throughout his whole academic career: the importance in the historical and conceptual reconstruction of medieval philosophical thought of focusing not only on the classical, most famous centers of knowledge production and transmission, but also on the often-neglected peripheries, which during the Middle Ages were increasingly more relevant in propelling the circulation of texts and ideas. In this volume, the notions of ‘center’ and ‘periphery’ are not understood in a merely geographical sense, but also in conceptual, linguistic, historical and literary terms. The richness of this approach is demonstrated by the broad spectrum of the contributions, which range from Islamic philosophy to Italian Renaissance, including the reception of ancient philosophy and of Arabic scientific works in the Latin world, and up to eighteenth-century French geography. Special attention is devoted to the philosophical thought developed in the German area. The volume does not lack in giving space to important medieval figures, such as Dante, as well as to more general philosophical notions, such as the concept of rationality. The volume explores connections, ruptures, relations and affinities through the analysis of paradigmatic figures, places and topics within the micro- and macro-histories of philosophy.

Nadia Bray is Research fellow at the Università del Salento in History of Medieval philosophy. Her research focuses on the reception of ancient and late-ancient philosophy.

Diana Di Segni is Research fellow at the Thomas-Institut of the Universität zu Köln. Her research focuses on the reception of Jewish thought in the Latin Middles Ages.

Elisa Rubino is Associate Professor in History of Medieval philosophy at the Università del Salento. Her research focuses on medieval German philosophy and on the reception of Aristotelian science in the Middle Ages.