In May 1596, when he expected to be at the end of his teaching career, Francisco Suárez (Granada, 1548 – Lisbon, 1617) received notice of a couple of letters from Philip II to father Garcia de Alarcón, Visitor of the Colleges of the Society of Jesus in Spain, in which the King ordered him to take charge of the Chair of Prima at the Faculty of Theology of the University of Coimbra, which was vacant (Scoraille, 1912, 335-338). Suárez, who had taught at the colleges of Avila, Segovia, Valladolid, at the Collegium Romano in Rome and at the colleges of Alcalá de Henares and Salamanca (where he was teaching since 1593), disliked the idea. He traveled to Toledo and managed to persuade the monarch to give up his resolution.

However, a new letter from Philip II, of February 10th 1597, insisted on sending Suárez to Coimbra, where the University thought of him as the right man for the job. This time Suárez couldn’t refuse (Scoraille, 1912, 339-342). He was in Coimbra on May 1597, where on the 8th he took possession of his new chair (Scoraille, 1912, XX). At the beginning of June, he traveled to Évora to act as a sponsor in the Doctorate of fellow Jesuit Gonçalo Luis (Cabral, 2010). This became the official recognition of Suárez’s own doctorate degree that had been given to him just before, under a 1553 brief by Julius III which allowed the Jesuit General to attribute doctorates to the worthiest Society members (Cabral, 2010). Still in 1597 he managed to print his famous book Metaphysicarvm dispvtationvm in Salamanca (Suárez, 1597), where he returned to in the summer, only to be back in Coimbra the following October (Scoraille, 1912, XX).

From then on, residing at the College of Jesus, he would print his additional main works in the Portuguese university city, being aided in his Theology chair by fellow Jesuit Cristóvão Gil (Cabral, 2010). He published Opus de virtute et statu religionis (Suárez, 1608-1609), Tractatus de legibus ac Deo legislatore (Suárez, 1612) and Defensio fidei catholicae (Suárez, 1613). He retired from teaching in 1616 (Moita, 2014, 16), and died the next year, in Lisbon, on September 25th, 1617.

The Jesuit buildings of Coimbra in 1597

The first Jesuits had reached Coimbra (from Lisbon) on June 13th, 1542. Simão Rodrigues de Azevedo (Vouzela, 1510 – Lisbon, 1579), one of Loyola’s companions and co-founder of the Society, took twelve brothers with him and, after a short stay at the Monastery of Santa Cruz, settled in some houses of S. Sebastião Street, on the hilltop of the walled city. They organized themselves as a “college”. This was, according to Francisco Rodrigues, the “first Jesuit college” in the world (Rodrigues, 1931, 304). The year before, Francis Xavier had left for India to spread the word of Christ in the East. The purpose of the new College of Jesus would be precisely to prepare Jesuits for their missions in the overseas possessions of the Portuguese Crown, in Asia, Africa, and South America, whilst installed next to a renowned University and to the best teachers in Theology, Philosophy and  Latin.

The first stone of a large new building was laid down on April 14th, 1547. It would soon become famous as young Jesuits from Portugal and from all over Europe were sent to Coimbra to learn and prepare for their missions. The young astronomer Christopher Clavius stayed there between 1555 and 1560. In the 1560s plans were drawn for a new Jesuit complex that included the ongoing College of Jesus and a new College of Arts (a secular college of royal foundation) to be transferred from its original downtown location. The College of Arts had been handed down to the Jesuits in 1555 but had to be kept as a separate building. A design plan is known of this period (cª 1568), kept at the Bibliothèque National de France in Paris. Hence in Coimbra, two buildings would appear, whilst in Évora, for instance, there was only one, encompassing the Jesuit College and the schools in the same edifice (Lobo, 2009).

So, what was the situation when Suárez arrived in Coimbra? We can advance a possible reconstitution of the Jesuit College complex in 1597 (Figure 1). We can see the built dormitory of the College of Jesus around the northeast patio, the provisional church along the southeast wing, and the foundations prepared for the construction of the definitive church, which would face to the south. By then the Jesuits were envisaging the construction of a new kind of church (different from the one of the 1568 plan), based on the Roman model of Il Gesù: a Latin-cross church, of one nave with lateral chapels and a dome (here without a drum) over the crossing. Construction started a year later. Suárez would have had the opportunity to attend the laying down of the first stone, which happened on August 7th, 1598 (Martins, 1994, 88-89).

In the stalled College of Arts, we can observe how the ground floor was left uncovered, with the classrooms along the western, southern and eastern wings, while the unfinished chapel and public ceremonies’ room were placed along the college’s north wing.

In a land plot between the two colleges, the Jesuit refectory and kitchen had been erected, in the years just before Suárez’s arrival (Martins, 1994, 81-87). They would serve both buildings as a common infrastructure. Also in this area, the classes had been conditionally installed in the pre-existent houses of former S. Sebastião Street, which had once belonged to the University. 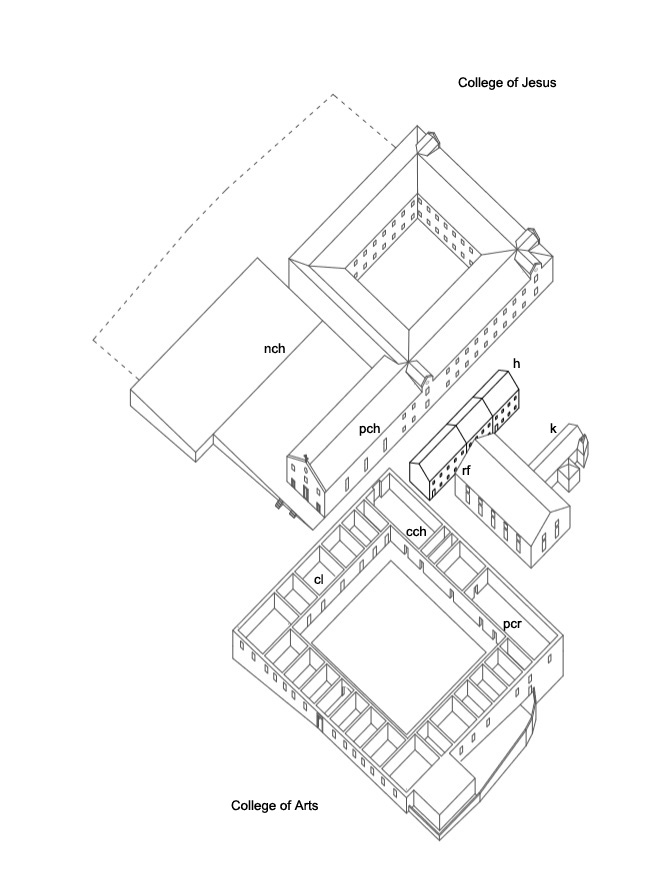 The Jesuit buildings of Coimbra in 1617

During Suárez’s twenty-year stay in Coimbra, work on both buildings would have continued. However, data on this period is scarce. So what was then the situation in 1617, the year Suárez died? One can imagine that the new church would have progressed during the first years of the seventeenth century. The nave would have been well under construction since it would be finished a couple of decades later (1640). Also, the building of the foundations and basement of the western half of the College of Jesus would have advanced through these years, including the definition of a second setback courtyard to the northwest. The provisional church still functioned of course (Figure 2).

On the other hand, we know that work on the College of Arts was finally resumed after 1609 (Brandão, 1933, 382). It is interesting to notice that Suárez himself referred to the poor conditions of the classes inside the houses of S. Sebastião Street: “besides being uncomfortable and unworthy of this university they [the classrooms] are already so old, that they threaten ruin” (Brandão, 1933, 385). The new building for the schools, although still incomplete, was formally inaugurated in February 1616, comprising eleven classrooms, the ceremonial room (sala dos actos) and the chapel (Martins, 1994, 100). Globally, one can easily conclude that, during his stay in Coimbra, Suárez would have lived and worked amongst a large and feverish construction site. 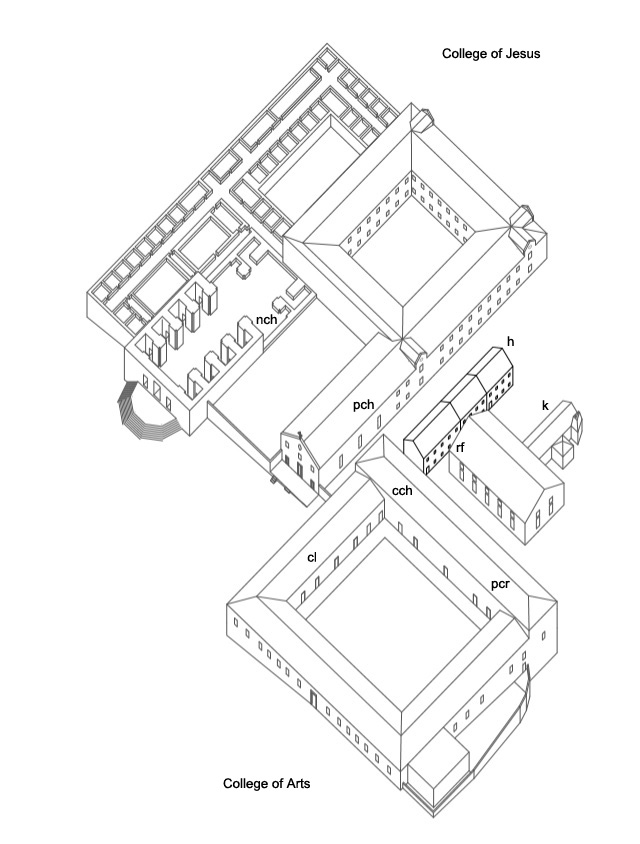 The assembly of the Jesuit complex would continue to advance in the following decades. The church nave was inaugurated in 1640, along with the vestry in the college’s southwest quadrant. The church crossing, dome, and head-chapel would only be completed half a century later, in 1698. The last important piece of the College of Jesus, the main southeast patio, would be started in the early 18th century. We can see it still under construction in the bird’s eye view by Carlo Grandi of 1732 (Figure 3). This image is an important testimony of the magnificence of the Jesuit Colleges of Coimbra, a few years before the expulsion of the Society from Portugal, in 1759. It went along with another type of magnificence, that of the Colleges’ much-praised cultural and academic output, for which Francisco Suárez –as we have seen– gave his profound and lasting contribution. 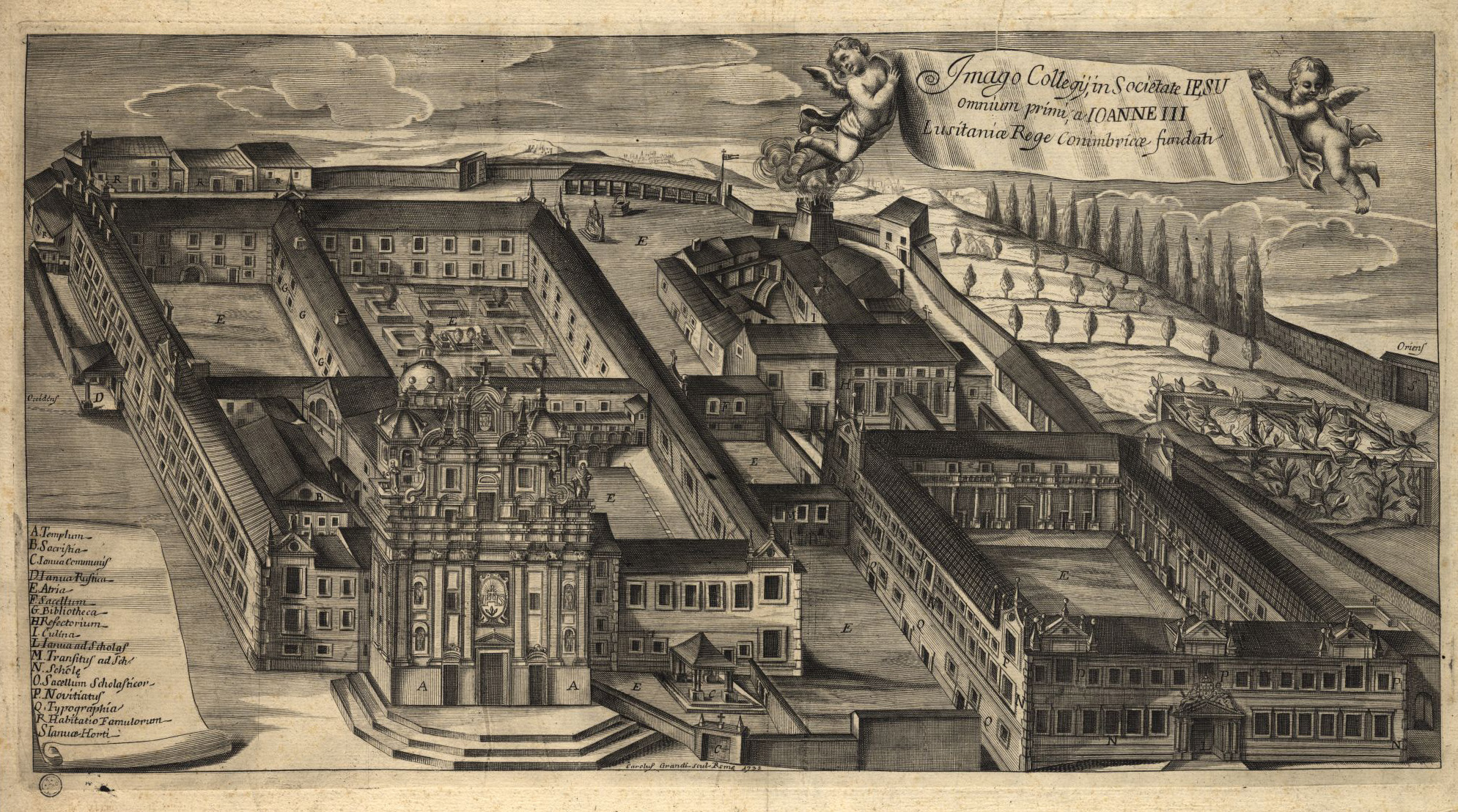 Rui Lobo is an Assistant Professor at the Department of Architecture of FCTUC, where he teaches since 1994. He graduated in Architecture from the University of Coimbra in 1994, and obtained his Ph.D. in 2010, with the thesis "The University in the City. University Urbanism and Architecture in the Iberian Peninsula of the Middle Ages and the Early Modern Age". His research is about theory and...

Science in the Work of António Vieira

Suárez, Francisco – Ontology (Science of Being)