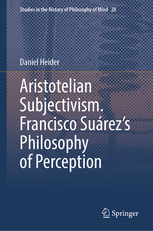 This monograph, published by Springer, presents new material on Francisco Suárez’s comprehensive theory of sense perception. The core theme is perceptual intentionality in Suárez’s theory of the senses, external and internal, as presented in his Commentaria una cum quaestionibus in libros Aristotelis De anima published in 1621. The author targets the question of the multistage genesis of perceptual acts by considering the ontological “items” involved in the procession of sensory information. However, the structural issue is not left aside, and the nature of the relationship due to which our perceptions are mental representations of this or that object is also considered.

The heuristic historiographical background includes not only the theories of classical authors, such as Aristotle and Aquinas, but also those of late medieval authors of the fourteenth century. These are headed by John Duns Scotus, John of Jandun, Peter Auriol and Peter John Olivi. Readers will discover the differences between Suárez’s and Aquinas’s views, as well as other sources that may have served as positive inspiration for the Jesuit’s theory. By considering the late medieval philosophy of the fourteenth century, this book helps, to a certain extent, to fill a gap in the historiography of philosophy regarding the link between late medieval and early modern scholasticism.

In the first part of the book, the metaphysics of the soul and powers is considered. Chapters on the external senses follow, covering topics such as the sensible species, the causes of sensation, self-awareness, and the ordering of the external senses. A further chapter is devoted to the internal senses and the author argues that by reducing the number and functional scope of the interior senses Suárez deepens the gap between the external senses and the intellect, but he reduces it through emphasizing the unifying efficacy of the soul.This book brings a synthetic and unifying perspective to contemporary research and will particularly appeal to graduate students and researchers in theology and philosophy, especially philosophy of mind.

Daniel Heider is an Associate Professor at the Faculty of Theology, University of South Bohemia in České Budějovice. He is also employed as a research worker at the Institute of Philosophy of the Czech Academy of Sciences in Prague. His research focuses on early modern scholastic philosophy, especially on philosophy cultivated by Jesuit authors headed by Francisco Suárez. His individual monographs publications include Suárez and His Metaphysics. From the Concept of Being via Transcendental Unity to the Kinds of Transcendental Unity (in Czech), Filosofia, 2011 and Universals in Second Scholasticism. A Comparative Study with Focus on the Theories of Francisco Suárez S.J. (1548–1617), João Poinsot O. P. (1589–1644) and Bartolomeo Mastri da Meldola O.F.M. Conv. (1602–1673)/Bonaventura Belluto O.F.M. Conv. (1600–1676), John Benjamin Publisher, 2014.