“Immanent Transcendence Francisco Suárez’s Doctrine of Being”, by V. Salas 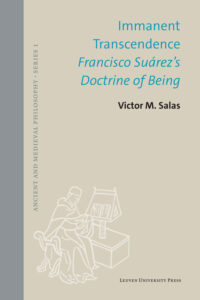 Long considered one of late scholasticism’s most important thinkers, Francisco Suárez has, paradoxically enough, often been treated only in relation to other medieval authors or as a transitional figure in the shift from medieval to early modern philosophy. As such, his thought has often been obscured and framed in terms of an alien paradigm. This book seeks to correct such approaches and examines Suárez’s metaphysical thinking as it stands on its own. Suárez is shown to be much more in line with his medieval predecessors who developed their accounts of being to express the theological commitments they had made. Central to Suárez’s account is a fundamental existential orientation, one that many interpreters have overlooked in favour of an understanding of being as reduced to essence or to the thinkable.

PrefaceAcknowledgments
Note on Textual SourcesIntroduction 1. The Life and Work of Francisco Suárez

2. The Theological Context and Purpose of the Suárezian Metaphysics

4. The Thesis and Structure of the Present Work

Chapter One: Metaphysics and Its Object

Chapter Two: Being and Existence

2. The Unity of the Concept of Being

4. Being as a Participle and as a Noun

Chapter Three: The Transcendentality of Being

1. The Transcendental Explication of Being

2.1 The Accusation of Mentalism

2.2 The Intrinsic Entitative Character of the Transcendentals

3. Transcendentality and the Evisceration of Existence?

Chapter Four: Being and Possibility

3. Suárez on the Divine Cognition of the Possibles

4. Suárez on the Entitative Status of the Possibles

4.1 The “Essentialism” of Essences?

5. Suárez on the Modal Character of Possibility

Chapter Five: Being and Analogy

2. Univocity and the Unity of Being