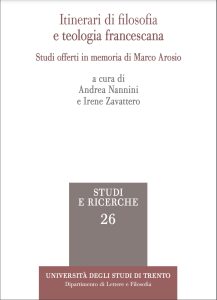 From the doctrines of the early Parisian Franciscans to the sixteenth-century Spanish disputes involving Franciscans and Dominicans, this collective volume covers three centuries of philosophical and theological thought. The Franciscan perspective is privileged to honor the memory of Marco Arosio (1963-2009), a specialist in the thought of Bonaventura da Bagnoregio, whose interests ranged also from the Franciscan masters of the first half of the thirteenth century to the preaching activity of Franciscan observance in the sixteenth century. The book consists of eleven essays, illustrating as many ‘itineraries’ of Franciscan thought, from Giovanni de La Rochelle to Bartolomeo da Colle, passing through Bonaventure, Riccardo di Mediavilla, Raimondo Lullo, who in old age became a Franciscan tertiary, Francesco di Meyronnes and Alessandro Bonini, known as Alexander of Alexandria.

Andrea Nannini, PhD in Medieval Philosophy, specializes in metaphysical themes of fourteenth-century philosophy, such as the univocity of being and the principle of individuation, the demonstration of the existence of God and the latitude dimension of being (latitudo entium). As a research fellow at the University of Warsaw, he worked on the critical edition of Stefano Langton’s Quaestiones theologiae, currently being published (“Auctores Britannici Medii Aevi”, Oxford University Press).

Irene Zavattero is a Professor of History of medieval philosophy at the University of Trento, Italy. Her work focuses in particular on the history of medieval ethics. She published many essays on the first comments on Ethica Nicomachea written at the Faculty of the Arts in Paris in the first half of the thirteenth century. She directs the series Flumen Sapientiae. Studies in the history of medieval philosophy (Aracne editrice). In the series Corpus Philosophorum Teutonicorum Medii Aevi (Meiner, Hamburg) she edited the critical edition of Bertoldo di Moosburg, Expositio super Elementationem theologicam Procli, prop. 66-107 (2003) and, with Coralba Colomba, Ulrich of Strasbourg, De summo bono VI, 4, 1-15 (2017).