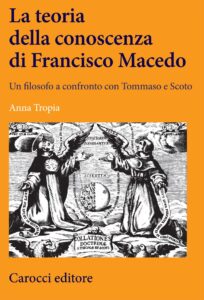 Thomas and Scotus are among the most representative philosophers of medieval thought. In the wake of a long tradition of interpretation, the Franciscan theologian Francisco Macedo (Coimbra 1596-Padua 1681) compares their systems, offering today’s reader a picture of their differences. How is the cognitive ability of an angel different from that of a human being? Thomas and Scotus have two different answers: by taking that of Scotus to extremes, Macedo celebrates his victory over his historical adversary in the modern age, rejoining the philosophical tradition that had flourished outside the schools and that bears the names of Descartes, Locke, Leibniz and Malebranche . Before these thinkers, however, it was the Jesuits of the sixteenth century who provided Macedo with the ground and the tools to elaborate his reading of Scotus. The author proposes an examination of the writings of the two authors starting with Macedo, following the expository method and tracing the origins of her interpretation of Scotus. Accompanied by an anthology of texts in translation, this book offers a detailed analysis of the Scotist theory of knowledge and its outcomes.

Anna Tropia joined the Department of Philosophy and Religious Studies at Charles University in 2018. She graduated in Philosophy from the University of Macerata, Italy in 2010. Title of the Dissertation: “The Scotists’ Reading of Suárez’s De anima (1572)”. In 2014-2015 she held a position of Research Assistant (“Ingénieur d’études”) at the Institut de recherche et d’histoire des textes (IRHT, Paris, France) in the framework of the Project SaRC (“Santé en Région Centre”).