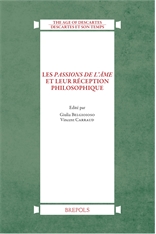 Les Passions de l’âme is Descartes’s last published work. When it appeared in 1649, both in Amsterdam and in Paris, the philosopher was already in Stockholm, invited by Christine of Sweden. Yet, it is for sure the discussion with Elisabeth, a few years earlier, what provided the occasion for its writing, even if Descartes probably considered that this work was required to complete the study plan planned for the Principia philosophiae. “My aim”, said Descartes, presenting it, “was not to explain the passions as an orator, or even as a moral philosopher, but only as a physicist”. By announcing on April 15, 1649 to Henry More the imminent publication of a short treatise on affections, he already specified that he would show “how all the movements of the body which accompany our passions are produced in ourselves not by the soul, but by the sole mechanism of the body ”.

However, Descartes did not content himself with speaking of the passions as a physicist. He made other major philosophical decisions which set him apart from all the moralists of the Grand Siècle: to endow mechanistic physics with a theory of passivity; to make admiration the first of the primitive passions; propose a new definition of love; substitute the principle of self-esteem for the traditional condemnations of self-love; give liberty the figure of generosity, etc. The Passions of the Soul are therefore, in more than one way, a singular work.

By bringing together the papers delivered during the double colloquium held in Paris and Lecce in 2014, this volume closes a rich set of studies initiated in 1987 on the occasion of the 350th anniversary of the Discourse on Method, systematically devoted to works published by Descartes himself. The articles that make up these acts add to the meticulous analysis of the Passions of the soul the examination of their contemporary context and grant the reception of the treatise, from Malebranche to Husserl. There will follow a renewed understanding of the work which delivers the last fruits of Cartesian philosophy. However, it does not dispel the enigma: for it is that of its object, “the nature of man.”