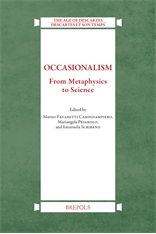 Brepols – The Age of Descartes, 2

Traditionally interpreted as an outcome of Cartesian dualism, in recent years occasionalism has undergone serious reassessment. Scholars have shifted their focus from the post-Cartesian debates on the mind-body problem to earlier discussions of body-body issues or even to the problem of causation as such. Occasionalism appears less and less a cheap solution to the mind-problem and more and more a family of theories on causation, which share the fundamental claim that all genuine causal powers belong to God. So why did the most spectacular emergence of occasionalism take place precisely in the post-Cartesian era? How did the scientific revolution and the need to fight back against the early modern resurgence of naturalism contribute to the success of occasionalist doctrines?

This book provides a historical and theoretical map of occasionalism in all its various forms, with a special focus on its seventeenth-century supporters, adversaries, and polemical targets. These include not only canonical authors such as Cordemoy, La Forge, Malebranche, Spinoza, and Leibniz, but also less explored figures such as Clauberg, Clerselier, Fénelon, Fernel, Régis, and Regius. Furthermore, the book covers the earlier Arabic and Scholastic sources of occasionalism and its later developments in Berkeley, Wolff, and Hume.

I. God and the World

II. Causality and the Laws of Nature