“Miguel Venegas and the Earliest Jesuit Theater”, by Margarida Miranda 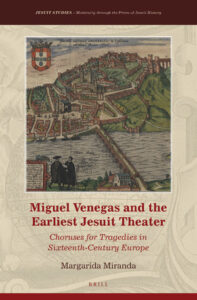 In Miguel Venegas and the Earliest Jesuit Theater, Margarida Miranda takes a fresh look at the origins of Jesuit theater and provides a detailed account of the life and work of Miguel Venegas (1529–after 1588) within the Iberian tradition.
The book details Venegas’s role as the founder of Jesuit theater in Portugal and the creator of a new musical genre, choruses for tragedies, which was gradually codified and emulated by successive generations of Jesuits. Venegas’s Latin tragedies in turn provided the model for regular dramatic activities in the global network of Jesuit schools, including, significantly, the first tragedies to be staged in Rome: Saul Gelboeus and Achabus, both of which had originally been performed in Coimbra in the mid-sixteenth century

Maria Margarida Lopes Miranda is an Associate Professor at the University of Coimbra’s Faculty of Arts and Humanities (FLUC), Classical Studies.