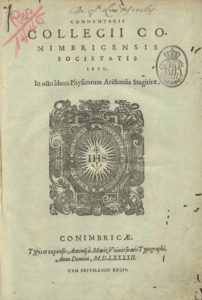 Composed by the Portuguese Jesuit, Manuel de Góis (1543-1597), the Commentarii Collegii Conimbricensis Societatis Iesu, In Octo Libros Physicorum Aristotelis Stagiritae was the first volume to be published (235x165mm) within the series known as the Coimbra Jesuit Aristotelian Course. It was published in 1592 by the Coimbra University Publisher António de Mariz, who, with the exception of the last volume of the series (Dialectica), will be also the publisher of the volumes of this series that were printed in Coimbra (among the eight titles of the entire series, three of them will be published in Lisbon). Two distinguished theologians, Gabriel da Costa and Egídeo da Apresentação – the former had been Rector of the Coimbra University (1590/91) and a prolific exegete, the latter, an Augustinian Eremite well versed on Philosophy and Law, as well as Theology, and by his mother a related to Pedro da Fonseca –, these two theologians, acting on behalf of the General Inquisitor of Portugal, the Cardinal Prince Albert, recognise, using the common terms, that the commentary on the eight books of Physics had nothing against the faith and the good customs, praise the subtlety of its doctrine, the style of and the subjects dealt with, and, before alluding to the immortality of this “part of the Coimbra Course” (hanc partem Cursus Conimbricensis, id est, commentarios in octo libros Physicorum Aristotelis), underline its utility not only to philosophers but also to theologians. The pace of the edition of this volume is known to us because on April 2nd, 1591, acting on behalf of the College of Jesus, Pedro Gonçalves signs, with António de Mariz, the printing agreement of “Dos físicos”, i.e. the Physica; with this contract, the University Publisher, António de Mariz, agrees on publishing the volume at his own expenses (AUC IV-1ªD-25-3-11). On May 13th, 1591, the Count-Bishop of Coimbra, D. Afonso de Castelo Branco, signed his formal approval; on July 26th the volume received the approval of the Inquisition Council, signed by António de Mendonça and Jacob de Sousa, and only days after, the University Senate approval, signed by Jerónimo Pereira, Jacob Lameira and Damião de Aguiar. Finally, on October 23rd of the same year (1591), acting on behalf of the Society of Jesus, and of the General, Claudio Acquaviva, Pedro da Fonseca gives his “nihil obstat” for the actual publication of the volume. One may here recall that when Jerome Nadal, visited Portugal (1561), he had instructed Pedro da Fonseca to lead a teamwork in order to deliver a written course to the Press (se procure que hum curso de scriptos se imprima, y en esto se occupe el P. Afonseca principalmente). Fonseca’s license of October 23rd, 1591, is interesting because he recognises (i) the existence of oral lessons in the Coimbra Jesuit College of Liberal Arts, all sharing common manuscripts; that (ii) the General Acquaviva had issued the order to review, enrich, develop and print them; (iii) without mentioning Góis’ name, Fonseca acknowledges that such a task, as the book of Physics (de naturali auscultationi) was concerned, had been already “carefully, wisely and duly corrected thanks to the commitment and intelligence of the masters”; (iv) he also acknowledges that, with the exception of Dialetics, the other commentaries were already being improved; (v) he finally agrees that, given that it would not be fair to let the students wait anymore, it was not necessary to wait for the Dialectica in order to accomplish for the “Course complete edition” (editio totius Philosophiae curriculum) and, as a consequence, the printing processes should proceed, “while some books are being printed, others are reviewed, and others finished” – Fonseca concludes. The volume on Physics was thus complete at the beginning of 1591, but it is highly plausible that Manuel de Góis conceived it already at the end of the 70’s and the beginning of the 80’s. As a matter of fact, in the last volume of the Coimbra Jesuit Aristotelian Course, on Dialectics, by Sebastião do Couto, the same King’s Licence (Alvará) that is printed in the volume on Physics, concerning the Jesuits’ privilege on books, is reproduced with its date, August 25th, 1572, and we know that Manuel de Góis taught two full philosophical courses in 1574-78 and 1578-82 in the Coimbra College; it would be thus inevitable that, when lecturing his courses, Góis did not know of the whole project of the Coimbra Jesuit Aristotelian Course and, since we now know that he was very well succeeded, it is far from being impossible that he was not already lecturing with aiming at it. The actual pre-history of this editorial initiative goes back to 9th February 1560, when the Provincial Miguel Torres alludes for the first time to the existence of “some dictations” (unos dictados) related to philosophy (ditados de las artes) suitable to be printed (para poderse imprimir). Torres’s does not allude to a formal “course” but, as already mentioned, this will explicitly happen in 1561, when Jerome Nadal instructs Pedro da Fonseca to lead the initiative. Fourteen years later (1575), the inspector Manuel Rodrigues saw his petition to Father General, Mercuriano rejected. In his petition he had asked permission for the actual publication of the already existent glosses, coming from the College of Jesus, found in 1547. The Provincial Congregation eventually agreed with the publication, in 1579, but the decision was only confirmed by Mercuriano’s successor, Acquaviva, elected in 1581. Coincidently, in this year, and as already stated, Manuel de Góis was almost concluding the second period of his lecturing activity in Coimbra.

With the only exception of the volume of the Dialectica, all the titles will be published with the logo of the Society of Jesus, in where the Latin motto, “Nomen Domini Turris Fortissima”, is read. With its 851 pages, the Physica is the second largest volume of the Coimbra Jesuit Course. The commentary itself occupies 827 pages but, as usually happens with the whole Coimbra Jesuit Aristotelian Course, the volume ends with an alphabetical Index of the subject matters dealt with (Index Rerum praecipuarum quae in hoc volumine continentur). Thanks to a letter written to the General Acquaviva by the Jesuit English mathematician Richard Gibbons (1547-1612), dated from January 15th, 1592 (ARSI, Lus. 71, 27r-28v), Ugo Baldini has conjectured that this lecturer of mathematics in Coimbra (1590/91) had an intervention in the final proofreading of the Physica volume (praeses corrigendae typographiae curriculi philosophici, quod sub prelo est).