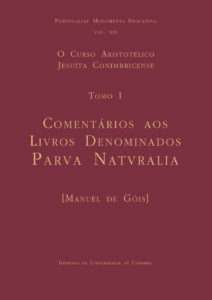 Aristotle’s work known under the Latin name Parva Naturalia had an undeniable, international philosophical fortune. Among all the comments that this text knew, the most relevant is surely that made in Coimbra, in the 16th century, by the Jesuit Manuel de Góis. Góis’ commentary was part of the famous Jesuit Cursus Conimbricensis, through which an impressive number of Early Modern scholars, from many Universities and colleges, spread from the Atlantic to the Urals, had been able to access Aristotelian natural history and philosophy.

From Coimbra, Aristotle thus arrived in Latin America, but also in the East, namely in China, a country that knew several versions and adaptations of the Jesuit Aristotelian Course.

This is the first bilingual edition (original Latin text and Portuguese translation) of the original commentary by Góis, published by the Coimbra University Press as the first volume of an overall project of translation of the entire Cursus Conimbricenses. More volumes will appear thus in the next months. Stay tuned!