“Religious Orders and Their Schools in Early Modern Italy (1500–1800)”, by David Salomoni 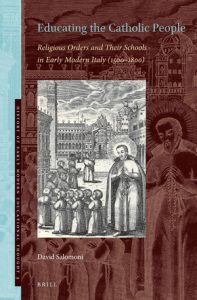 In Educating the Catholic People, David Salomoni reconstructs the complex educational landscape that arose in sixteenth-century Italy and lasted until the French Revolution. Over three centuries, various religious orders, both male and female, took on the educational needs of cities and states on the Italian peninsula, renewing the traditional humanist pedagogy. Historians, however, have not attempted to produce a synthesis on this topic, focusing mainly on the pedagogical activities of the Jesuits and neglecting the contributions and innovations of other groups. This book addresses this historiographical gap, providing a new chapter in the comparative study of pre-modern education.
David Salomoni, Ph.D. (2017, University of Rome III and Université d’Avignon) is post-doc researcher for the ERC project “Rutter: Making the Earth Global” at the University of Lisbon, Portugal. He has published monographs and articles in the fields of history of education and science, history of religious orders, gender studies, and social and political history of pre-modern Italy. In 2017 he was awarded the Galileo Galilei prize for young scholars by the Rotary International.

2 Historical Paths: The Definition of Pedagogical Identities (16th–17th cc.)
1 Male Religious Orders
1.1  An Educational Benchmark: The Jesuits
1.2  The Barnabites
1.3  The Somascans
1.4  The Piarists
1.5  The Theatines and the Servites
2 Female Religious Orders
2.1  The Ursulines
2.2  The Angelic Sisters and the Guastalla College
2.3  Rosa Venerini and Lucia Filippini: The Pious Teachers

3 Schools and Colleges: Processes of Settlement in Italy and Contiguous Areas
1 From Lombardy to the Kingdom of France
2 Schools for Northern Italy and Small Towns
3 A Congregation for the Large Cities
4 Between Central, Southern and Eastern Europe
5 The Franciscans between Continuity and Rupture

4 Different Types of Schools Operated by Religious Orders
1 Public Education Entrusted to Religious Orders and Secular Priests
1.1  Udine and the Barnabites: On the Outskirts of the Peninsula
1.2  Jesuits and Piarists in the Duchy of Modena: A Competition between Local Networks
1.3  Guastalla: A Multi-layered Religious Education for the Community
2 Episcopal Requests
2.1  The Somascans Between Schools and Diocesan Seminaries
3 Other Types of Schools Operated by Religious Orders
3.1  Barnabite Schools Established by Notables and Aristocrats
3.2  The Religious as Private Teachers
3.3  Women, Nuns, Teachers: The ‘Educandato’ of Saint Charles

5 The End of an Educational Season: The Schools of Religious Orders between Scientific and Political Revolutions (17th–18th cc.)
1 The Scientific Culture: Religious Orders on the Eve of Modernity
1.1  Famiano Michelini and the Galilean Piarists
1.2  Baranzano Redento
2 School Reforms in the Age of Enlightenment
2.1  The European Situation
2.2  The Situation in Italy: The Italian States and the Religious Orders
3 Conclusion