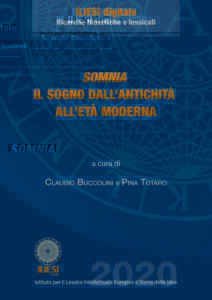 More information and free PDF download
This volume, mostly in Italian, deals with crucial moments in the philosophical debate on dreams, from antiquity and late antiquity to the modern age. Starting from a historical-critical overview by Tullio Gregory, this book addresses, with the interventions of Francesco Fronterotta and Francesca Alesse, the thought of Plato and Aristotle, treated here along two main axes of the ancient tradition. To the latter are added, by the papers of Francesca Calabi and Domenico Devoti, the fundamental phases of elaboration by Philo of Alexandria and by the Jewish and New Testament tradition. From the side of the revival of Neoplatonic and theurgic themes moves the contribution of Luciano Albanese on Julian the Theurgist, followed by the essay by Gaetano Lettieri on Agostino as a decisive author for the redefinition of the notion of dream. Such a complex and rich picture reflects in Renaissance and early modernity, which is addressed by  Claudio Buccolini and, as regards the Cartesian lexicon, in Giulia Belgioioso’s paper. The text by Anna Lisa Schino deals with the theme of prophetic dreams from La Mothe Le Vayer and Hobbes, while Daniel Garber’s contribution is dedicated to the author of Leviathan and the relationship between dreams and the politics of the imagination. In turn, Pina Totaro investigates the contexts of the conception of dreams and knowledge in Spinoza, while the essay by Isabelle Olivo-Pendron and Gilles Olivo considers, in a modernity which goes from Montaigne to Rousseau, not the dream but rather the reverie.
By IEF - Universidade de Coimbra|2021-11-03T12:39:17+00:00March 5th, 2021|News, Uncategorized|0 Comments