At the school of the Scholastics: rereading the theories of arts and letters in the early modern age 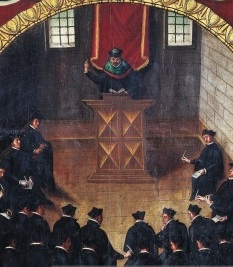 This collective project developed at the University of Louvain (GEMCA – Group for Early Modern Cultural Analysis) conjugates three disciplines: art history, French literature, and neo-Latin literature. It aims to draw all the consequences, in the fields of the history of letters and the arts, from a matter of fact confirmed by historians of philosophy over several decades: the permanence and even the omnipresence of Scholasticism (traditionally associated with medieval culture) as the basis of philosophical-theological training in all universities in Europe in modern times. This massive intellectual background likely exerted a more or less marked influence on the other fields of knowledge and the arts. But these interactions still remain largely unexplored.

The project focuses on a matter that is well known to GEMCA’s research staff, i.e. works on arts and literature written in the 16th and 17th centuries, in France and Italy. The aim is to shed new light on these treatises, by studying the way in which the scholastic culture of their authors could influence their writing both in terms of substance (questions and debates which echo contemporary scholastic literature) and form (use of concepts, terms connoted or whose definition is enriched as soon as their scholastic use is taken into account).

The project started on October 1, 2017, and will run for five years. It is led by a group of three promoters assisted by three doctoral students, it also provides for the hiring of a post-doctoral researcher. It will be punctuated by multiple scientific activities (in particular an intensive seminar, two international conferences, a summer school, and numerous invitations from foreign researchers) and will give rise to numerous publications (theses, articles, collective volumes) (See publications) as well as putting an interactive database online. The activities will fit into the program of the GEMCA research center, whose Schol’Art project overlaps with certain major scientific concerns and is of interest to the work of many members.