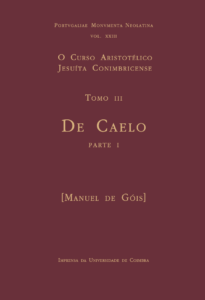 First part of the Coimbra commentary on Aristotle’s De Caelo, known as Coimbra Jesuit Commentaries on Aristotle, published in Lisbon 1593 by Manuel de Góis (1543-1597). Here Góis comments and discusses subject matters such as the being in movement, the structure, and composition of the Universe, the five simple bodies, the four elements of the so-called sublunar world, their seat and type of local movement.

This is the first bilingual edition (original Latin text and Portuguese translation) of the first part of the original commentary by Góis. It is published by the Coimbra University Press as the third volume of an overall project of translation of the entire Cursus Conimbricensis. More volumes will appear thus in the next months. Stay tuned!