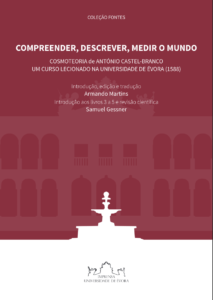 The work Cosmotheoria (Cosmotheory) is an introductory course on geography and the use of some mathematical instruments (astrolabe, celestial globe, altimetric scale among others). It reflects university lectures given by the Jesuit António de Castel-Branco in Evora during 1588. Thereafter, the work was circulated in manuscript only. The present book provides a larger readership with its critical edition accompanied by a translation and an introduction. The whole is based on research work that combined different approaches ranging from textual criticism theory and history of science and instruments, to classical, humanistic and Neo-Latin literature studies.

Demonstrably the work of Castel-Branco, despite being a singularity within the context of teaching offered at the University of Evora, is in line with the pedagogical goals of Jesuit teaching. It constitutes a synthesis of scientific, geographic, and historiographic literature, made accessible to an audience of beginners (students of philosophy who attended the 1588 course).

The present book elucidates the conceptual and methodological frameworks and the questions of sixteenth-century geography and historiography, with findings relevant to the study of contemporary authors such as Fernández Enciso which Castel-Branco based himself on. It further shows to what extent Cosmotheoria is indebted to works of Clavius, Juan Pérez de Moya, Florián Ocampo and André de Resende. As far as the geographical descriptions are concerned, it is argued that Cosmotheoria moves along distinct conceptual frameworks when describing European as opposed to non-European territories.

The Cosmotheoria possesses distinctive aspects such as the option for the parallel presentation of operations for the astrolabe and the celestial globe, an originality in the context of the literature about those instruments. The work also shows the awareness of implications of the Gregorian reform of the calendar on the use of instruments.

The critical edition of Cosmotheoria showcases various problems of textual transmission, such as the particularities of works based on students’ notes (reportationes) and those of the edition of scientific texts (e.g. the interpretation and reproduction of mathematical diagrams), and discusses the relation of the text with other works (e. g. the Conimbricenses commentary on Aristotle). This work opens a window on the knowledge on geography and cosmography, as taught at the University of Evora in the second half of sixteenth century.

Armando Martins is assistant Professor in the Department of Linguistics and Literatures of the University of Evora and member of the Center for Classical Studies of the University of Lisbon. He specializes in Neo-Latin literature of 15th to 18th centuries. He has an interest in literature in a wide sense, i.e., including technical texts on geography, treatises of casuistry, academic theses, philosophical treatises and grammars. His approach to such texts aims at the study of their literary form, the materiality of the print and manuscript. Being aware of the absence of any systematic and exhaustive instruments (dictionaries, histories, editions) in the area of Neo-Latin studies, his objective is to make the text intelligible in its verbal dimension and discover the relations between those texts, on one hand, and literature and art of that period, on the other. He published “Casus conscientiae: un caso límite de forma discursiva” in Perla Chinchilla Pawling (coord.), Las formas y las no-formas discursivas. Una aproximación a la historia de la identidad de los impresos. Universidad Iberoamericana A.C.; and in co-authorship: Manuel Álvares. Instituição da Gramática em três livros, aumentada e explicada por António Velez. Tomo I. Morfologia I: Paradigmas do nome, pronome e verbo. Princípios básicos das oito partes da oração. Introdução de Eustaquio Sánchez Salor e Juan María Gómez Gómez, edição crítica de Juan María Gómez Gómez e Carlos Salvador Díaz, tradução de Armando Martins e Cláudia Teixeira. Coimbra: Imprensa da Universidade. Samuel Gessner , Interuniversity Center for the History of Science and Technology (CIUHCT, ULisboa)

Samuel Gessner is an assistant researcher at the Center for History of Science and Technology (CIUHCT, ULisboa). During his career he worked as a postdoctoral researcher in Portugal, France and Germany. His research focuses on the diverse mathematical cultures in medieval and early modern Europe. He examines how they interacted by studying the role of mathematical and astronomical instruments as conceived by both theoreticians and practitioners. He uses artefacts of material culture, in particular mathematical and astronomical instruments, as primary sources alongside textual documents. An artefact often is the starting point for his research. He published the study “Trepidation spheres” in the journal Centaurus (vol. 63, no. 4, 2021, p. 714-754) and, in co-authorship with Michael Korey, The wondrous course of the Planets. A heavenly machine for elector August of Saxony: An introduction to Eberhard Baldewein’s planetary clock in Dresden (2022).