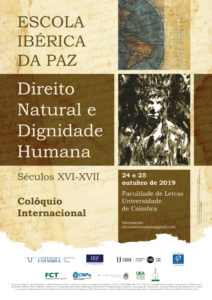 The Iberian School of Peace: Natural Right and Human Dignity. International Conference, Faculty of Arts and Humanities of the University of Coimbra, October 24th-25th, 2019

The Iberian School of Peace, solidified during the building period of Iberian empires by distinctive masters of the universities of Salamanca, Coimbra and Évora, has lead a series of key debates on the duties and rights of the human being and on the universal principles of the natural right and the law of nations who should preside to the coexistence among the people of the world, highlighting an intrinsic principle of sociability among Men and an intrinsic principle of sociability between the political communities they form. Based on the notion that peace was an essential trait of life and not the result of the fear of war, these masters argued, often against the course of events, that men were created free and equal; that civil power was constitutive of every human community; that neither the emperor nor the Pope were the masters of the world; that the peoples’ right to self-determination and the right to property were not dependent on faith or the degree of civilizational development, but on man’s natural freedom and his mastery over his actions; that, given the substantial unity of the human species, there could be no natural slavery, strictly speaking, but only legal slavery; that the power of Pagan princes was not, in itself, of a lesser or distinct nature than the power of Christian princes; that the empires of the Portuguese and Spanish kings in the Western and Eastern Indies should preferably be founded on a free pact between the peoples since imperial laws should not contradict natural dispositions, although without jeopardizing the titles that, under natural right and the law of nations, could serve as justification for war and legitimization for conquest, occupation, legal slavery or the principle of guardianship. The articulation between right and ethics and between peace and justice was reinforced; the right of resistance of people and communities was legitimized on the basis that an unjust law could only be called a law by analogy; the basis for the concept of injury to humankind was set along with the concept of conscientious objection of soldiers in times of war by rebutting the argument of the fulfillment of orders as a way to evade responsibility. The notion of restitution/reparation as an act of justice was defended, thus being elevated to the level of the jus gentium and establishing the supremacy of the Reason of Humankind over the Reason of the State and of natural right over sovereignty. In a time such as ours where it is urgent to “not see Humankind as the subject of rights from the point of view of the State but recognizing instead the limitations of the State from the point of view of Humankind”, the lesson of the Renaissance classics of Salamanca, Coimbra and Évora, given the everlasting fertility of many of its postulates, remains thought-provoking.