Born in the Portuguese northern town of Chaves in 1560, Baltasar Álvares died in Coimbra on February 11th, 1630 with sixty-nine years of age. His parents were João (or Jerónimo) Gonçalves and Leonor Gonçalves. With seventeen years of age he entered the Society of Jesus on November 1, 1578 in Coimbra, where he studied Philosophy and Theology (1585), continuing his studies afterwards in Évora (1586). For three years and a half, while an undergraduate in philosophy, according to Gomes (1960: 165), Baltasar Álvares helped Manuel de Góis with the composition of the Coimbra Jesuit Aristotelian Course (Cursus Collegii Conimbricensis Societatis Iesu). Between 1587 and 1590 Álvares taught Latin in Lisbon (St. Antão College). He got his masters degree in Arts on October, 1st, 1590, and his licence degree on May, 31st, 1594, the latter attributed by the Chancelor António Carvalho. Álvares lectured Philosophy at the Jesuit University of Évora untill March 1593/94, and in the Jesuit College of Coimbra (1594/98), where he also lectured Theology (1599/1602). Below are listed two “conclusions” that pertain to his Évora and Coimbra first period of teaching (for this kind of literature see Gomes 1961). Gomes (1960: 165) says that it was during this second Arts course in Coimbra that Álvares wrote the Tractatus de Anima Separata. On November, 11th, 1602, in Évora, he got his PhD in Theology. Machado (1741: 441) says Álvares taught Philosophy for eight years and Theology, for twelve years but Gomes (1960: 165-173) is much more precise: Álvares got the chair of Terça until 1604; of Vespers, until 1607; and of Prima, until 1610 and again during 1612/13. In his capacity of Book Reviewer (revedor de livros) for the Inquisition he was asked by the general inquisitor, D. Fernão Martins Mascarenhas, to organize the catalogue of forbiden books (Index auctorum) eventually published in Lisbon, 1624. His nomination as Book Reviwer, was preceded by an inquiry to verify the “ancestry of his blood” which was done till the epoch of his grandparents in his home-town of Chaves. Baltasar Álvares had an impressive University career in Évora. He became chancellor of the University for two periods (1610/15, with absences, and again 1620/22). Acting in his capacity as chancelor, together with more twenty-six university personalities Baltasar Álvares signs on December, 12, 1620 a letter to the King protesting against the municipality’s wishes to close the University of Évora (see Rodrigues 1944: 114-9). Between 1619 and 1628 he engaged in the editing process of Francisco Suárez’s oeuvres.

It was probably during his second staying in Coimbra that Baltasar Álvares composed the Tractatus de Anima Separata (Gomes  1960) that was to be published (1598) as an appendix to the ‘De Anima’ in the famous Coimbra Jesuit Aristotelian Course (there is, however, nothing that could prevent him of having composed the appendix in Évora, sometime in between his studies of Theology and his lectures on Philosophy). Baltasar Álvares is better known for having edited Francisco Suárez’s Opera, a work he begun immediately after Francisco Suárez’ death (1617), and which, between 1619 and 1628, he managed to publish in seven volumes in Lyon. To Álvares we also owe the “most complete commentary ever written” on Suárez’s De Legibus (Pereña 1971: LIV), between 1608 and 1612. Pereña mentions several more manuscripts by Álvares (Pereña 1973: LXII). Besides a few appreciations that have been expended concerning his intervention as Suárez’s editor (Gil Colomer 1964), nobody has studied Baltasar Álvares’s texts yet, as far as we know, except his Tractatus de Anima Separata (Carvalho 2016; Spruit 2016; Camps 2015; Guidi 2013, 2018 and 2019). After alluding to Álvares’s friendship towards Suárez, Gil Colomer (1964: 143) sticks to the interferences the Portuguese editor might have introduced due to his previous composition of the Treatise on the Separated Soul (Gil Colomer 1964: 138). This Treatise should be interpreted in accordance with the Coimbra Jesuit Course (the books on ‘De Anima’ II, ch. 1, q. 2, of ‘Physica’I ch. 9, q. 9, and of ‘De Generatione et Corruptione’ I ch. 4, q. 8 are explicitly quoted) and, if represents the first Jesuit systematic text on the problem of the separated soul (Carvalho 2016), it must be interpreted in the larger context of Thomism and Scotism, as received by a Dominican (Caietano, Bañez) and even Jesuit complex set (Fonseca, Suárez, Molina) (see Guidi 2019). Finally, it may be noticed that a part of Álvares’s Treatise arrived in China in Guido Alenis’ adaptation of Coimbra ‘De Anima’ (Zhang 1999: 373-4 and Meynard 2017).

The structure of the ‘Treatise on the Separated Soul’

Mário Santiago de Carvalho (1958) is Full Professor of Philosophy at the University of Coimbra and Scientific Coordinator of the R&D Unit, Instituto de Estudos Filosóficos (IEF). Author of several books and papers related to his main philosophical fields of research – Portuguese Aristotelianism, Medieval Philosophy, Metaphysics and Philosophy of Music – he has taught at other Universities, in... 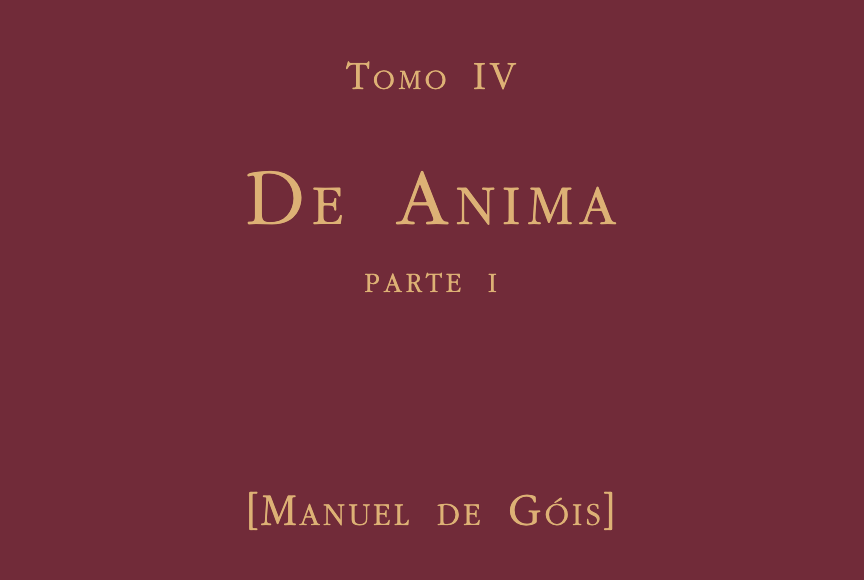